How to Apply Magnetic Lashes

We all know the struggle of applying fake lashes. Whether it be not getting it close enough to your lash line or making a complete mess out of the glue, we’ve all been there. Speaking from my personal experience, fake lashes are one of the most difficult makeup techniques to master. After around five years of trying to accomplish the fake lash application, I still can’t get it perfect. So, after scouring the internet for other ways, there might finally be a way to easily apply fake eyelashes: magnetic lashes.

Magnetic lashes offer the same appearance as regular fake lashes without any of the mess and trouble of applying them. Unlike fake lashes, magnetic lashes provide minimal effort, and they are easy for anyone to use – no matter your makeup experience level. So, here is our guide to magnetic lashes including how to apply them flawlessly!

What are magnetic lashes?

Magnetic lashes are essentially false eyelashes without the glue. But, even though they appear very similar on the eye, there are some differences in application. Instead of using lash glue as an adhesive, magnetic lashes adhere to your normal lashes with, you guessed it, magnets!

One of the best things about magnetic lashes is that you get way more uses out of them compared to typical fake lashes. This is because there isn’t any glue or goopy residue left on the strip from the time you last wore them. The magnet on these lashes is very strong, so you can reuse them for a much longer time period!

It is important to remember that some magnetic lashes are different than others. So, they are going to have different application methods as well. Be sure to read through the instructions on the box you have before applying them to your lashes.

Things to watch out for

Even though magnetic lashes are simple and easy to apply, they do have some downfalls. If you don’t apply them correctly, you won’t experience the benefit of wearing them.

One of the biggest things to watch out for is applying too much mascara. It is recommended that you apply mascara to your natural lashes before applying the magnetic lashes. But, you should only be applying a thin layer! That means one or two swipes on the lashes, and that’s it! Otherwise, it is going to be way too clumpy when pressed in between the two magnetic strips.

Also, when you first take the magnetic lashes out of the box, they may be a little stiff. In order for them to camouflage to your natural lashes, you’re going to want to roll them out beforehand. Bend the lash strips in a “U” shape. This ensures that they will mold to the natural shape of your lash line.

Something you need to be extra cautious of is keeping good care of them. You want to be extra cautious when both applying and removing them. Be sure to keep them in a safe area when you are not wearing them. Also, never wear your magnetic lashes to sleep or in the shower. Keeping great care of your magnetic lashes is the key to reusing them longterm.

Lastly, something that deters people from buying magnetic lashes is their price. But, one of the great things about investing in magnetic lashes is that you get so many more uses out them. Instead of them lasting a few wears, they can last for months! But, if you still cannot fathom spending a lot of money on them, keep reading to find some low-cost options! 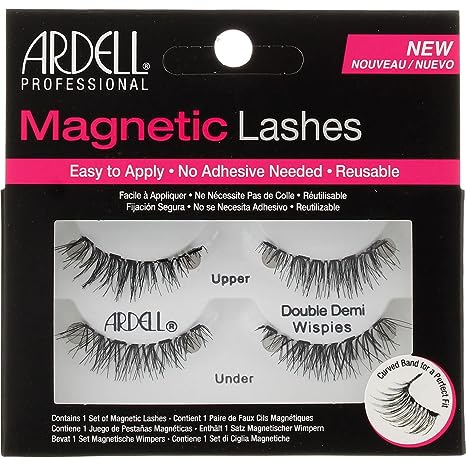 Ardell is one of the best inexpensive fake lash companies out there. They are accessible both online and in-store. They come with great “wispie” style lashes which is great for magnetic lashes. These kinds of lashes are going to look much more natural on the lashes since there are two strips.

SEPHORA COLLECTION One Two Lash Magnetic Lashes
These lashes are ultra-lightweight and can be worn multiple times. The magnetic applicator allows for easy application, and the magnetic case protects and stores the lashes.
Check Current Price
We earn a commission if you click this link and make a purchase at no additional cost to you.

The great thing about these magnetic lashes is that they come in a multipack of smaller lash sections. This allows for more flexibility in how you want to apply them. Also, they are going to look much more natural than a full strip. Once you get the hang of a simple magnetic lash, definitely take it up a notch and try these!

Learn everything about hybrid lashes vs classic vs volume lashes here.

Can magnetic lashes be reused?

Are magnetic lashes bad for your eyelashes?

Can you apply mascara to magnetic lashes?

Do You Put Mascara On Fake Lashes?

Can you sleep with magnetic lashes on?

You should not sleep with magnetic lashes on. Before you go to sleep, carefully remove them, and keep them in a safe area. If you sleep in them, you risk damaging the lashes itself. But, you also run the risk of an infection on your eye!

How long do magnetic lashes last?

There really is not a set amount of time they last for. As long as you take proper care of them, they can last for as long as you want them to. In some instances, they can be worn upwards of 50 times! Making sure to keep them in a safe area and apply/remove them properly is essential!

How to Fix Broken Makeup

How To Remove Dip Nails

What is snail mucin? & why should You be using it?

The Best Primer For Large Pores